Galloping Through The Winds of Artistic Change: Horse Imagery in Modern Indian Art

A symbol of strength and vitality, the imagery of the horse has been omnipresent throughout the course of visual history around the world. Transcending through ancient mythologies and cave paintings, through visual vestiges of royal prominence in the medieval era, the depiction of horses also found a well-defined representation in the landscape of modern art. 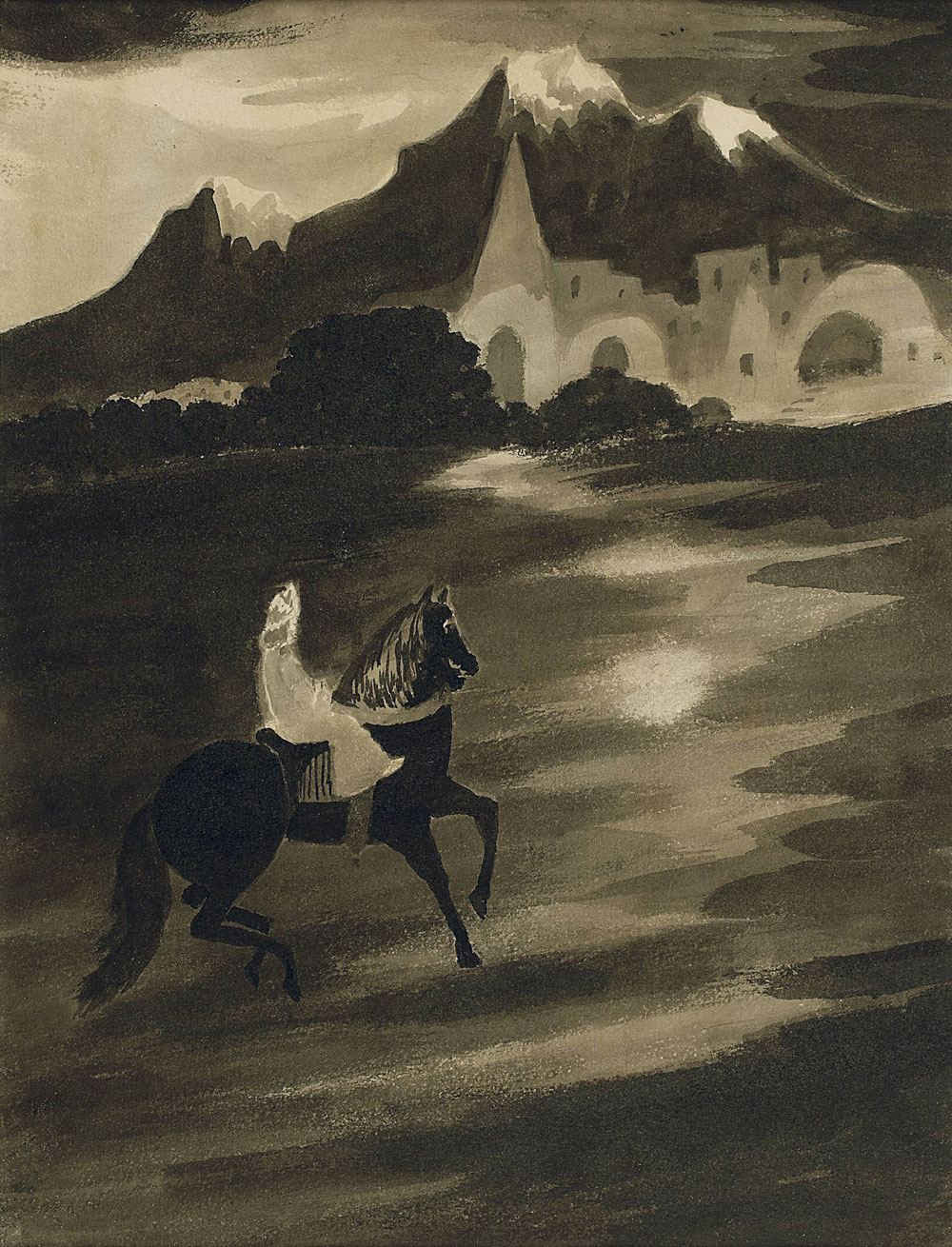 Pakshiraaj Ghoda by Gaganendranath Tagore, Circa 1920, Watercolour and brush and ink on handmade paper, 13.5 x 10.2 in.

In India also, equine and equestrian imagery galloped through the winds of change and was featured in creations by revered icons of Modern Indian Art. In a work titled ‘Pakshiraaj Ghoda,’  Gaganendranath Tagore invokes the purely equestrian image of a traveller on a horse. Created Circa 1920, this work belongs to a phase when the artist executed most of his works with black ink (SUMI-E). As opposed to realism, his works from this period were conjured on the basis of imagination. 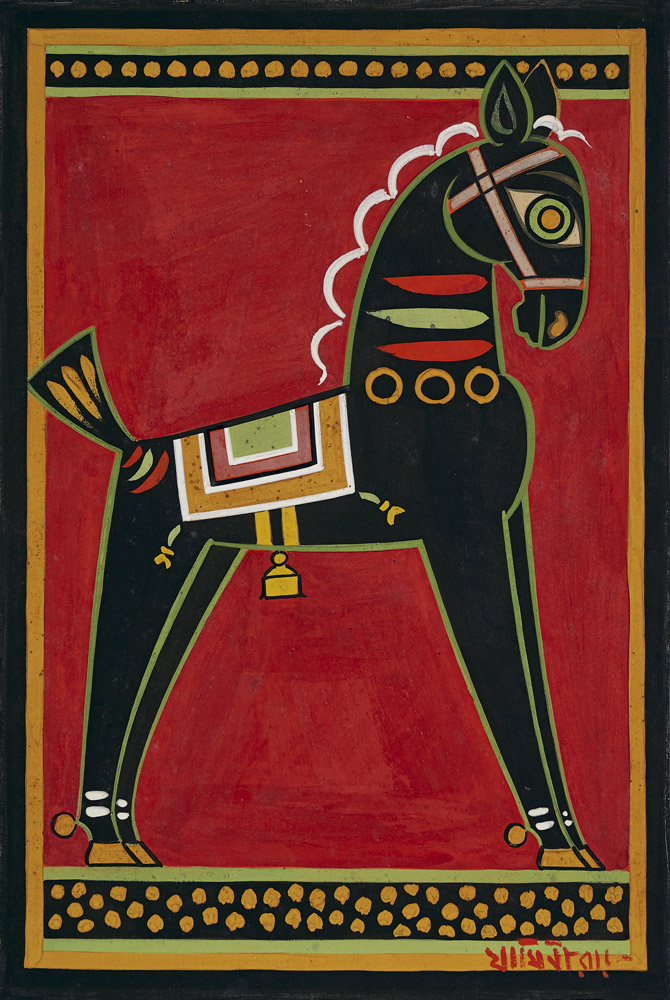 Jamini Roy was another artist from the generation whose oeuvre frequently featured horses. Highly influenced by the folk traditions of India and especially Bengal, he painted horses that were inspired by terracotta horse sculpture from his native region of Bankura. One of such works is a creation from Circa 1950. Complementing the minimalist form with the vibrant red background and presence of other traditionally bold colours like green and yellow, the artist has perfectly captured the essence of the horse as a traditional motif in Indian art.

As a new liberated era dawned on the country in 1947, there was also a tectonic shift in the landscape of Indian art. Coming together with other rebellious artists of the time, F. N. Souza founded the Bombay Progressive Artists' Group. They were inspired by the unique visual idioms of western movements such as Cubism, Expressionism, and Surrealism, and sought to give a brand new modernist identity to Indian art. Through the adopted modern approach of the artists from this generation, the horse motif continued to find new visual reinterpretation.

M.F. Husain’s devotion to painting horses continues to be one of the greatest examples of artistic muse in the chronicles of modern Indian art. Boundlessly painted through the course of his career, his works featuring horses evoke emotions that surpass the usual realm of perception. The valiant brush strokes were just the reins that eventually set his horses blazing across canvases. The aesthetic beauty of the horse always appealed to him, not just their physicality. His inspirations knew no bounds and his celebration of the unseen syntax of a painter’s world is evident, given the puerile bliss he exuded while working.

Husain’s horses were inspired by a crisscross of memories and influences. As a child in Indore, Husain would visit his grandfather’s friend, who was a farrier, in his workshop, and there began an early fascination with the majestic animal. A deeper influence would come from witnessing the 20-foot bamboo and papier-mâché image of a horse during Muharram. Talking about his inspiration for horses, the artist said, “'I have not seen these wild animals in the jungle. I have seen them imprisoned in stone on the walls of Khajuraho, Konark, Mahabalipuram - the temples of medieval India.”

Another important moment came with his visit to China to attend the 1952 World Peace Congress in Beijing. During his time there, he got the opportunity to meet the old Chinese master Xu Beihong, whose name is synonymous with horse paintings. Husain’ visited Beihong’s studio where he observed an extremely large-scale painting with innumerable horses. In vigorous motion and gracefully galloping, these horses brimming with energy, had a great impact on the artist.

The earliest horse painting executed by M.F. Husain was titled ‘Passage of Time.’ Painted in 1954 in a muted palette of oil medium, the work is an ode to the contribution of horses as dependable companions throughout the journey of human evolution. 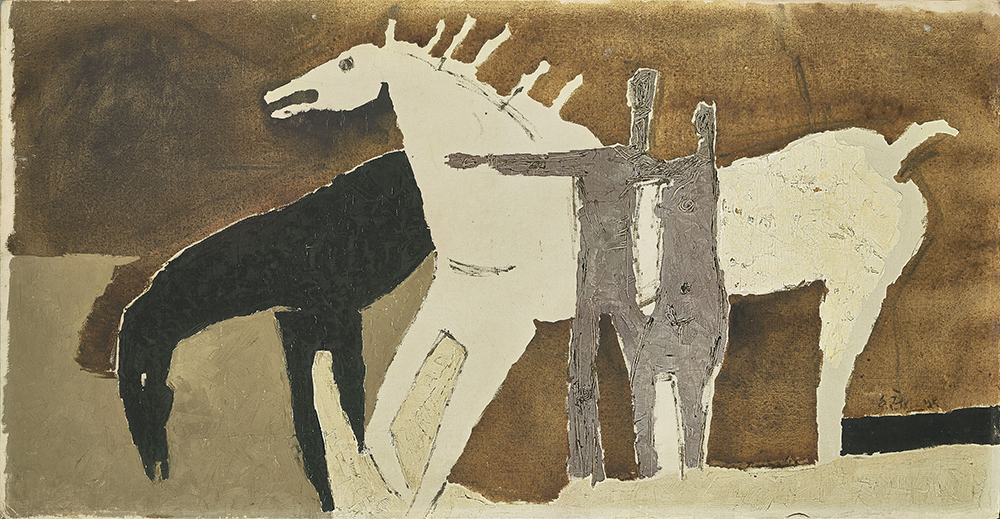 In the painting, the horses are mirrored by two figures- a male and a female. The male is pointing towards a direction ahead, as if showing the woman the destination.  The sinuous neckline of the male figure displays the occurrence of the moment, and his posture suggests a sense of uncertainty between the two. The horses stand in sturdiness and solidarity with the humans, and partake in their conquest of exploration and expansion.

They consistently metamorphosed and evolved and yet remained constant through a kaleidoscope of religious, historical, spiritual, and other themes explored by the artist.

“The cavalcade of my horses is multi-dimensional. They, like lightning, cut across many horizons. Seldom are their hooves shown. They hop around the spaces. From the battle eld of Karbala to Bankura terracotta (horses), from the Chinese Tse Pei Hung horse to the St. Marco horse, from the ornate armoured ‘Duldul’ to the challenging white of Ashwamedh,” the artist once said.

M. F Husain had a deep fascination with the learning and fables of all religions and captured them in a number of acclaimed series of paintings. 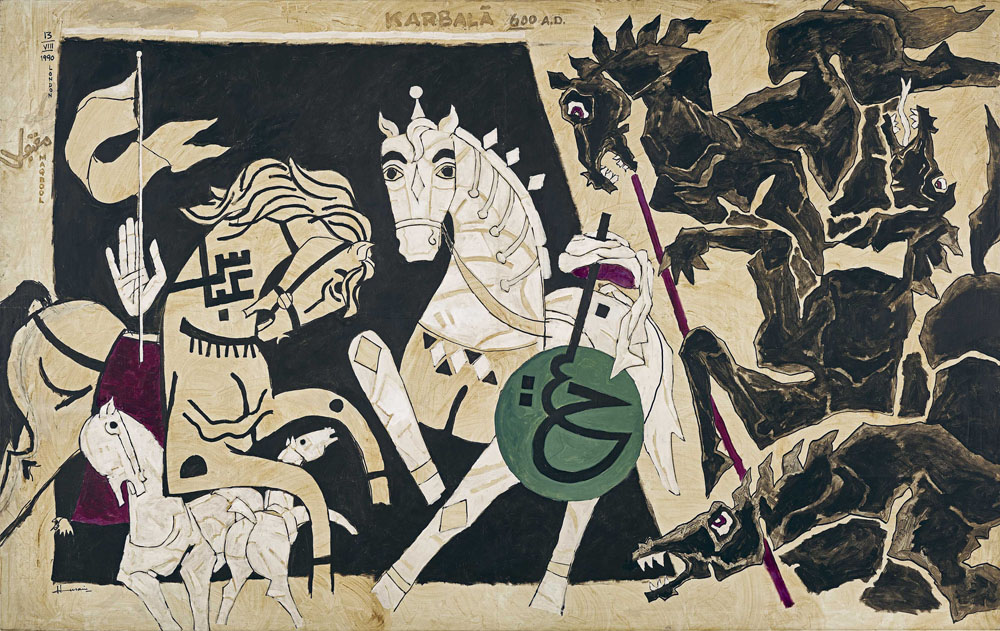 In a 1990 work titled ‘Karbala,’ the artist pays homage to the great martyrs in the battle of Karbala, fought between the second caliph, Yazid I, and the grandson of Prophet Mohammed, Hussain Ibn Ali. The regal presence of Zuljanah, Hussain Ibn Ali’s is symbolic of bravery and is portrayed in glory and serenity. Valiantly fought, the riding heroes of the battle are represented through the identity of their companions, the horses. In this work, Husain also incorporated his understanding of Oriental art, in particular Chinese stylistic treatment. The enemy is represented through the evil horses in black, and are depicted with Komodo dragon-like ferocious attributes. Their portrayal with forked tongues and slithering heads conveys their inherent character traits. The battle is commemorated to date during an annual ten-day period during the Islamic holy month of Muharram, culminating on the tenth day of the month, known as the day of Ashura.

There barely remained a subject Husain hadn’t expressed on, and each image was a conglomerate of breeding new clusters and ideas that sprung out of its depths. One such work that made for a perfect amalgamation of literature, mythology, and art is an untitled creation depicting an important chapter towards the end of the Hindu epic ‘Mahabharata’. The pivotal characters are visually represented accurately. Bhisma Pitamah is shown on the bed of arrows, which signifies the fact that actions and their consequences are inevitable to escape.

Arjuna’s ‘Bow and Arrow’ represents the battle that must be undertaken against tyranny. The four horses and the Sudarshan Chakra represent the might of Krishna, who strives to instil justice and wants to put an end to the violence. Executed in a minimalist style with only three colours, this work was painted in front of a live audience in the year 1994. 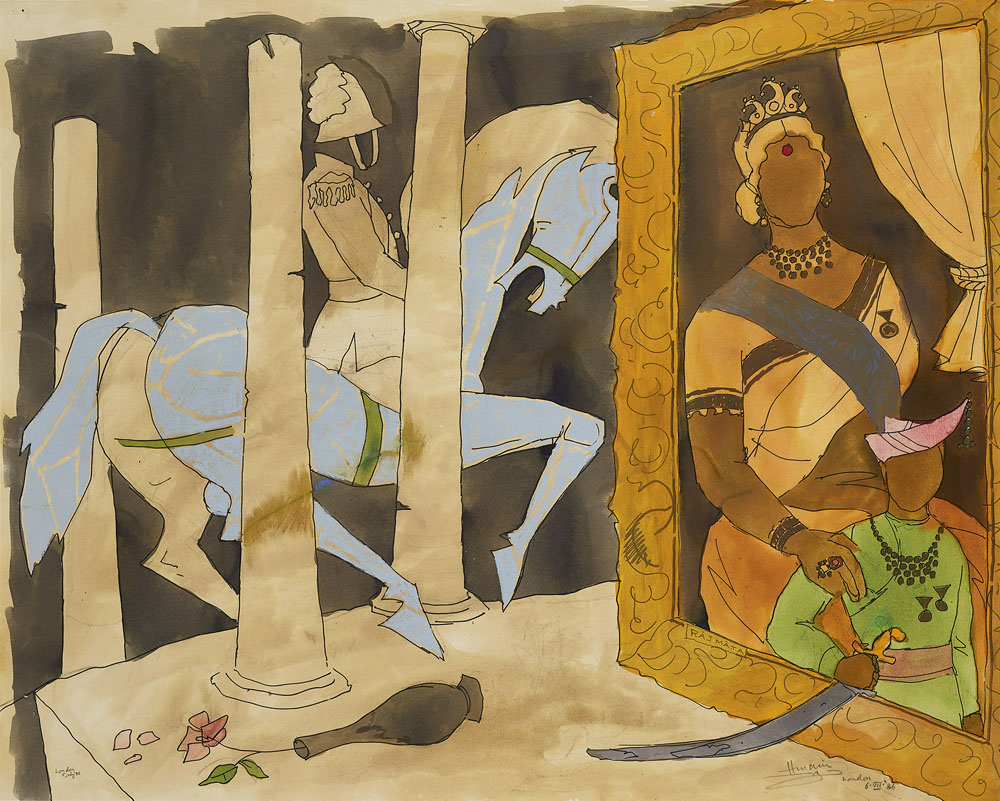 Horses are also depicted in several works from the famous Raj Series by the artist. Titled ‘Rajmata With The Crown Prince And Bodyguard,’ depicts a faceless queen from erstwhile colonial India by a window as she rests her right hand on the shoulder of her son or the prince. On the outside, a bodyguard on the horse is keeping a vigil for the royalties. 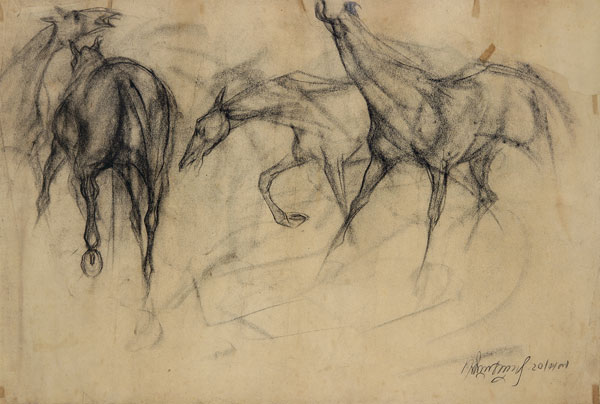 Sunil Das was another Indian modernist who devoted a large part of his oeuvre to depicting horses. The artist successfully captured the force and strength of moving bulls and horses. The inspiration for these works had come during a visit to Spain in 1962, where he witnessed and observed animal sports. He also used to spend time at the stable of Calcutta’s Mounted Police and did live sketches observing the horses. "I must have done 7000 horses between 1950 to 60," the artist said once about his preoccupation.

A master sculptor, B Vithal had a deft ability to switch between the two-dimensional and three-dimensional art of painting and sculpture. Horses were one of the most painted subjects in his works, and he executed them both in his paintings and sculptures. Experimenting with their forms, the artists gave a more playful touch to his horse paintings. 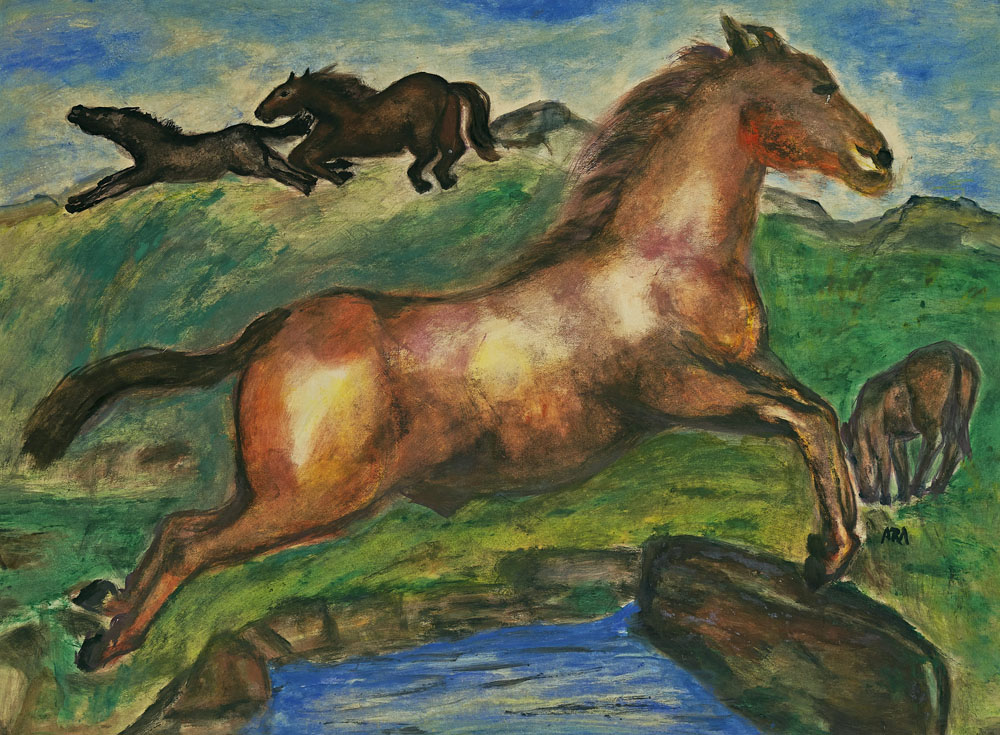 There are several other eminent modernists of India who have captured the elegant beauty and buoyant energy of beasts in their work. In an untitled work from the year 1970, revered modern artist K. H. Ara explores momentum by depicting three galloping horses in a beautiful meadow. The dominant horse in the centre is seen jumping across a small water body. Reminiscent of the wide green pastures of the Indian mountainside, the painting captures the joy and liberation of animals amid the beauty of nature. 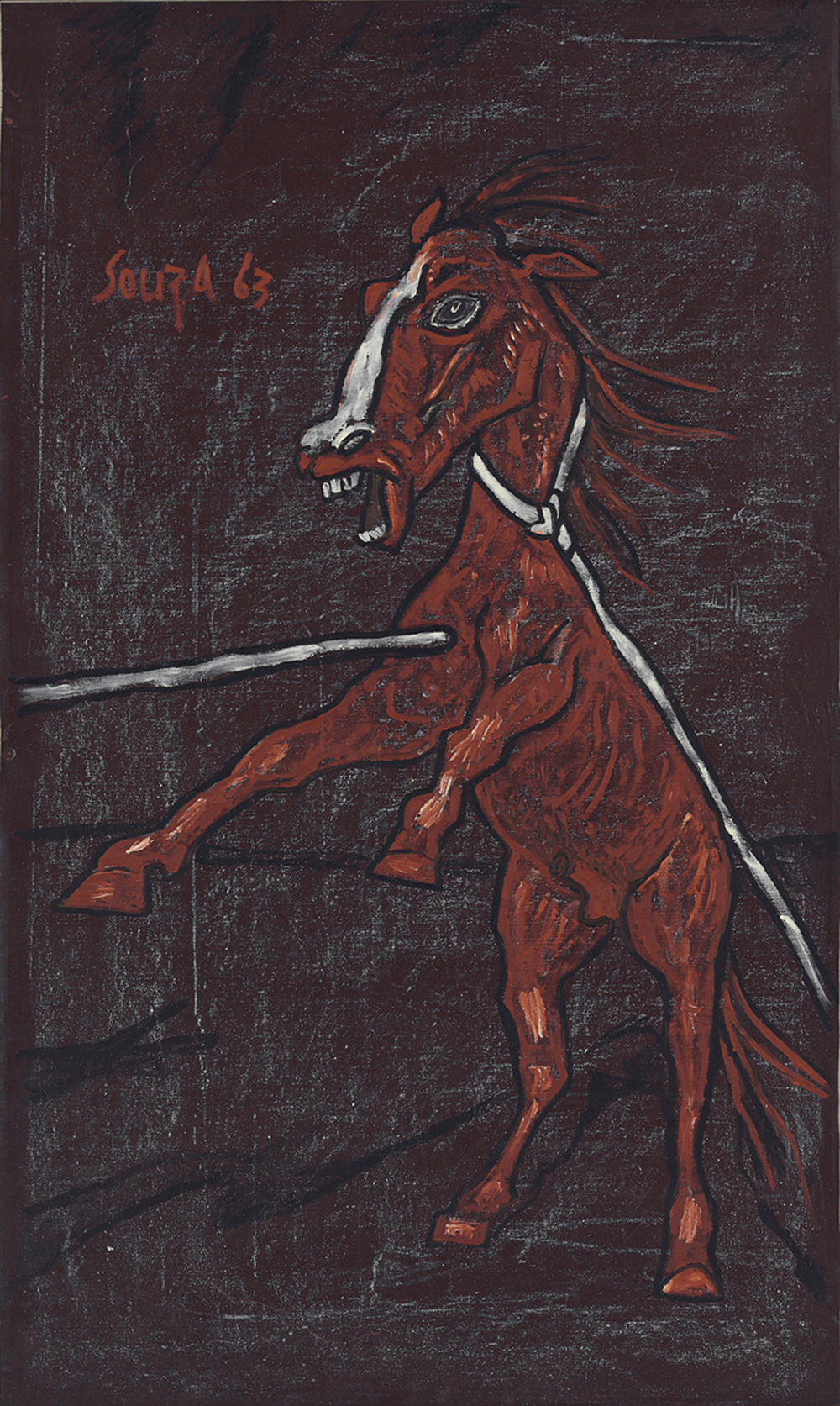 In a work from the year 1963, artist F. N. Souza captures a rearing horse with the forelegs off the ground. Executed in the medium of oil on canvas, the artist has outlined the form of the animal with his signature style of the black lines. 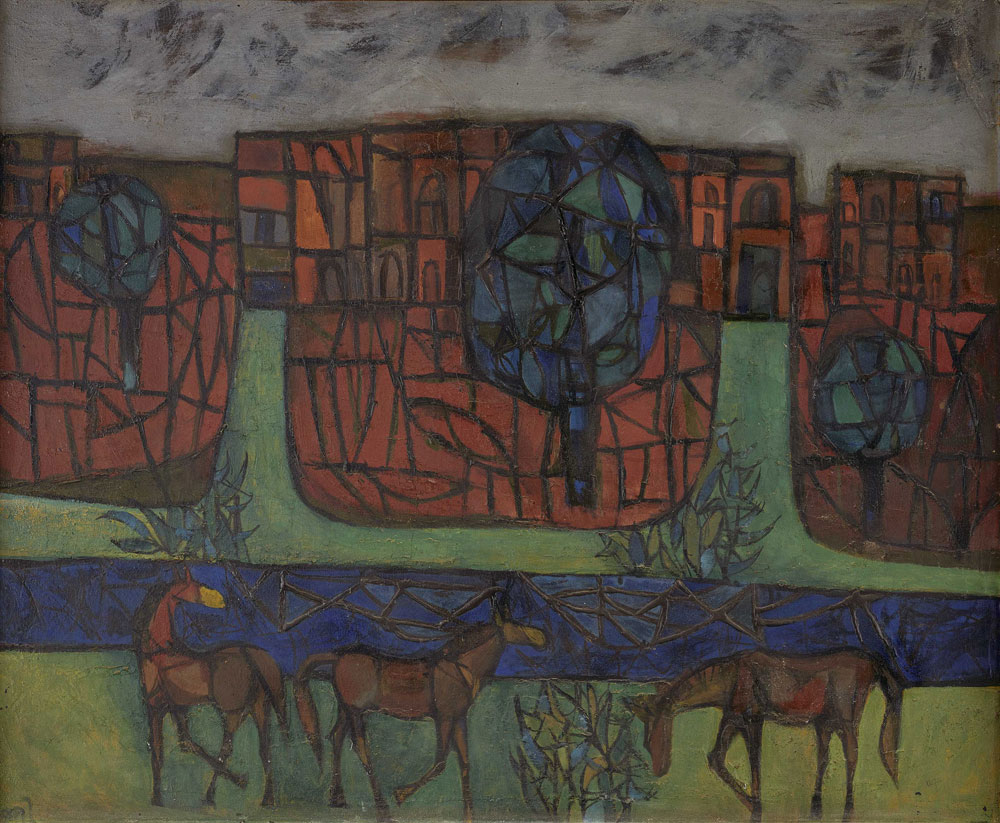 An example of K.G. Subramanyan’s ability to brilliantly blend indigenous elements with western ideals is a work titled ‘Scenes With Horses’ which depicts three horses in a meadow. This work was executed in 1959 with oil on board. It was exhibited at  VI Biennale de São Paulo in São Paulo, Brazil, in 1961. The artist also received the Medallion of Honourable Mention for this work at the biennale. It was also featured in a book titled ‘India’s Rockefeller Artists.’

The idea of an artist observing a Polo match for painterly inspiration is a fascinating one. Because what is a better avenue than that to at once observe the unbridled energy of horses, as well as the perfect harmony the humans and horses continue to cherish.

We Bring To You Not 1 But 6 Horse Exercise