Semi-finals are often played in pressure but with great team with passion and spirit, Pressure is just a word which encloses them for victory. There were high ending matches and what a comeback in the last chukker says it all about this magnificent Polo. 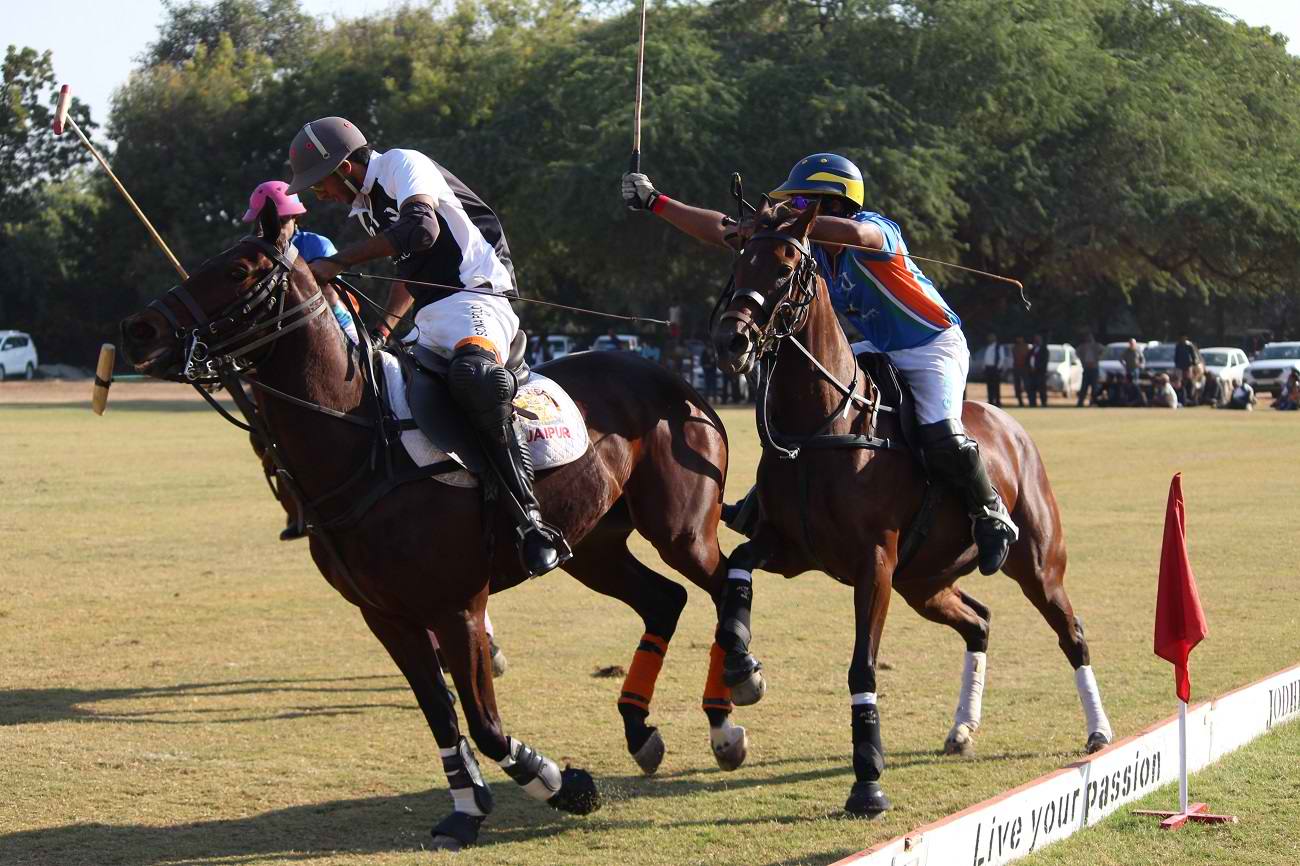 The Day opened with a great spirit with the sky turning blue and the breeze hitting the face like pecking someone. The crowd was demographically packed and hometown crowd behaving like a pact for motivation. The chief guest has arrived with his beautiful moustache, a person with his dog hunting towards the game like a fanatic supporter of the team and a lady blasting come-on on the side lines as a motivational speech for the team, all taken place on the matchday 4. Rajputana & Central India Cup, the 4th day of the 10th goal tournament of the 19th Jodhpur Polo Season witness 4 teams contesting for the qualification of the finals. Each team glancing towards the trophy to hold it with pride and that’s how the matches emerges for overwhelming Jodhpur Season.

SAHARA WARRIORS V/S CENTRAL ACADEMY
The First semi-final match of the 10- goal cup of the 19th Jodhpur season, matchday 4, was in between Central academy and Sahara Warriors. Both teams are always having a similar style of attacking and their horses are pretty fast too.

Here is the match squad of Both team-

The 2nd chukker begins as both the team contesting for the victory to qualify for Rajputana cup finals. A good coordination between the Sahara team and Pranav scoring a beautiful goal for Sahara warriors. He strikes it magnificently with his back hand. With the same length to the chukker, Abhimanyu winning the contestation with Pranav. Abhimanyu is providing his 100% for his team, central academy. Abhimanyu taking the ball towards the goal and he is about to strike and he shoots outside the goal post. Bad luck for Abhimanyu Pathak. As the match emerges, Central academy is favoured with 40-yard penalty and Bhawani Kalvi eyeing at the goal and but not able to score the goal as he misses the penalty. Simran not wasting the time, strikes towards the enemy goal but Abhimanyu with his defensive skill stopping the attack. Pranav taking the ball from the half line and scoring a thunderous strike towards the goal post and scores it for Sahara warriors. The 2nd chukker ends as the score is Sahara warrior- 5 and central academy 1.

The 3rd chukker begin and Sahara warrior with no pressure showing their class and passion for the sports. The crowd is flabbergasted with the performance of Sahara warriors. Simran starting the chukker with controlling the ball in the beginnings of the 3rd chukker. Padmanabh is not able to show his game in the match as everyone else in the game is outstanding him with their skills at the moment. Abhimanyu dribbles the ball up to the enemy goals and scoring a beautiful goal and commentator quote- he is showing his real class and passion for the game. Out of sudden, 30-yard penalty awarded to Sahara Warriors. Siddhant stands for this penalty and scoring the goal for the team so that it can count for the game for the qualification to the finals for winning this cup. The third chukker ends with the results of Sahara warriors-6 and central academy-2. Sahara Warriors are looking tight and tough for the qualification to the finals of the Jodhpur cup.

The 4th chukker starts with central academy favoured for the penalty but Abhimanyu didn’t able to score the goals and striking it towards out of the goal post. Out of nowhere, pacho got struct by the ball but with the luck, he is fit and fine for the game. The ball rolls back in the game by the umpire and pacho in anger dribbling the ball up to the enemy goal and scores it beautifully taking the revenge for the strike to his face. The score is now central academy 3 and Sahara warrior 6. Out of a sudden, Brilliant goal by Vikramaditya aka aku and crowd is clapping for his goal. The score is 6 to 4 to Sahara warriors. Central academy looking for the comeback. Pranav in half line taking the ball towards the open goal post but not able to score the goal. Bad luck strikes back in the house of Pranav team. But Pranav answering to his bad faith and scoring a beautiful goal which was fabulous and people loved it. The 4th chukker ends with the score of Sahara warriors 7 and central academy 4.

Congratulation to Sahara Warriors winning the match incredibly and qualify for the finals in the Jodhpur Rajputana cup. 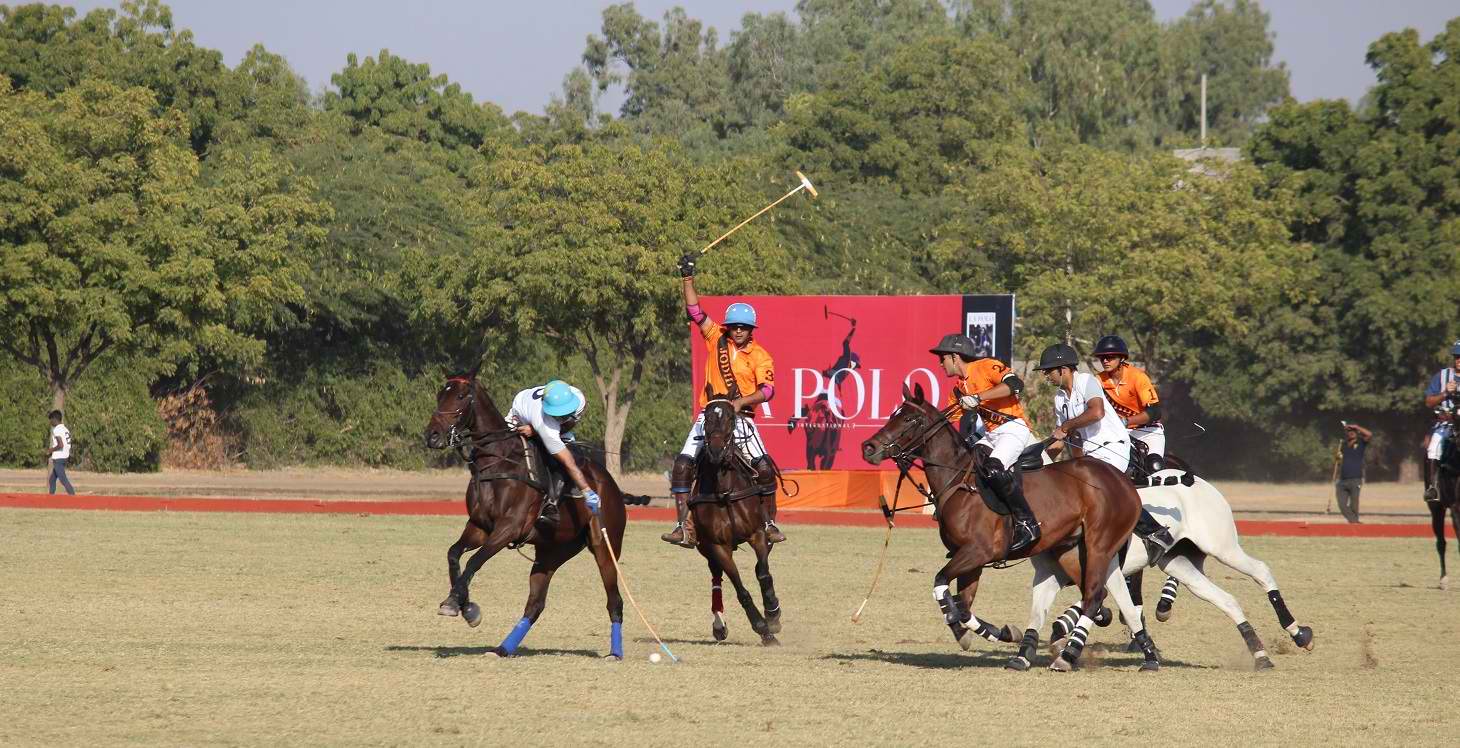 Jodhpur V/S POLO HERITAGE
The First semi-final match of the 10- goal cup of the 19th Jodhpur season, matchday 4, was in between Hometown team ‘Jodhpur’ and Polo Heritage. Both teams are passionate for their Polo and comebacks are there traditions. The Jodhpur team is playing in full confidence as it is the hometown team and showing great spirit to its home town crowd who are exhilarating to watch the game.

Here is the team squad of both team-

The first chukker begins with Jodhpur in control. Out of a sudden, 60-yard penalty is awarded to Polo heritage and with no pressure, Dhruvpal godara, the best striker in India, strikes the ball but Jodhpur magnificently defending the strike of Dhruvpal. Out of sudden, Dhruvpal scores the goal and polo heritage takes the first lead in the first chukker of the semi-final game against the Jodhpur team. The balls are now rolled back in the half by the umpire and Jodhpur in control of the game. One of the lady in the crowd is encouraging her hometown team by saying come on and giving them motivation. foul by the Jodhpur team and 40-yard penalty is awarded to polo heritage. Dhruvpal godara again stands up to ball and eyeing on the goal, beautifully striking it towards the goal. The polo heritage scores one more goal and the result is polo heritage- 2 and Jodhpur the hometown team nil/0. Out of nowhere, Emilio got himself jumped on to the ground and got injured himself very badly. Epidemic team and the ambulance are on the pitch and everyone in the crowd is hoping that Emilio is fit. Emilio stands up and starts walking in the ground checking whether he can play the game. Yes, Emilio is fit again and playing the game. Polo heritage got a penalty because of the foul committed on Emilio. Dhruvpal godara scores the goal and converting the penalty. The result is now 3-0 to polo heritage. In the end of the 10 seconds, Angad kalaal looking for the goal and converted it so that Jodhpur can come-back on their feet for the incredible comeback. The hometown crowd loved the way Angad scoring the goal for Jodhpur. The first chukker ends with the results polo heritage 3 and Jodhpur 1.5 Jodhpur getting the half point advantage.

The second chukker starts with Jodhpur looking confident to upside things back to their way as it controls the game in the beginning. In a sudden, Angad kalaal using its defensive duties to stop the attack of the polo heritage team. Polo heritage got one more penalty in favour of them and Jodhpur carelessly providing it. Dhruvpal scoring it beautifully and also hitting the umpire on the back who is standing out of the goal. The crowd loves it and giggling. Dhruvpal playing like a goal machine in this game showing its class. In some time, Jodhpur provided with 60-yard penalty and Angad kalaal scoring the goal beautifully. Angad kalaal looking for the comeback. Out of nowhere, Jodhpur scoring the goal again and getting the crowd excited. The score is now 4 - 3.5 to Polo heritage. Seeing this, Dhruvpal Godara in battling spirit answering the home team Jodhpur and the home town crowd, Dhruvpal scores a fantastic goal and taking polo heritage scores to 5 – 3.5. commentator quote about Dhruvpal that he is the finest player of polo in India right now. The second chukker ends with the result polo heritage in lead 5 to 3.5 to Jodhpur.

The 4th chukker undergoes and Jodhpur looking for Comeback and a strategy is seeing to be applied. In a moment, a penalty is favoured to Jodhpur and Angad kalaal looking to take the penalty but not able to score as he strikes towards the outside of the post. Out of nowhere, Basheer Ali dribbling and cutting out Emilio scoring the goal for Jodhpur. The score is Jodhpur- 4.5 and Polo heritage 6. Out of a sudden, Angad kalaal like a boss scoring one more goal for Jodhpur. Jodhpur team is looking for the comeback and the hometown crowd going fanatic. The score is 5.5 to Jodhpur and 6 to polo heritage. In a moment, whistle was blown and a penalty was given to Jodhpur team and people were amazed by this. Angad kalaal, the hero, converting the penalty and Jodhpur comes from the back and getting the lead or snatching from Polo heritage. The score is now 6.5 to 6 Jodhpur. But with a great faith, umpire has given polo heritage a 60-yard penalty. This is Dhruvpal godara who is looking to answer hometown team but he couldn’t able to score it. Only 11 seconds remaining and Foul was given to Jodhpur. Only 4 seconds remaining, Jodhpur got 5 b. The 4th chukker ends and Jodhpur getting the incredible comeback and crowd of the hometown team was amazed by their hometown team- Jodhpur. The 4th chukker ends with Jodhpur – 6.5 and polo heritage- 6.

Congratulation to Jodhpur for the amazing and incredible comeback victory. Jodhpur team becomes the 2nd team that qualifies for the final. 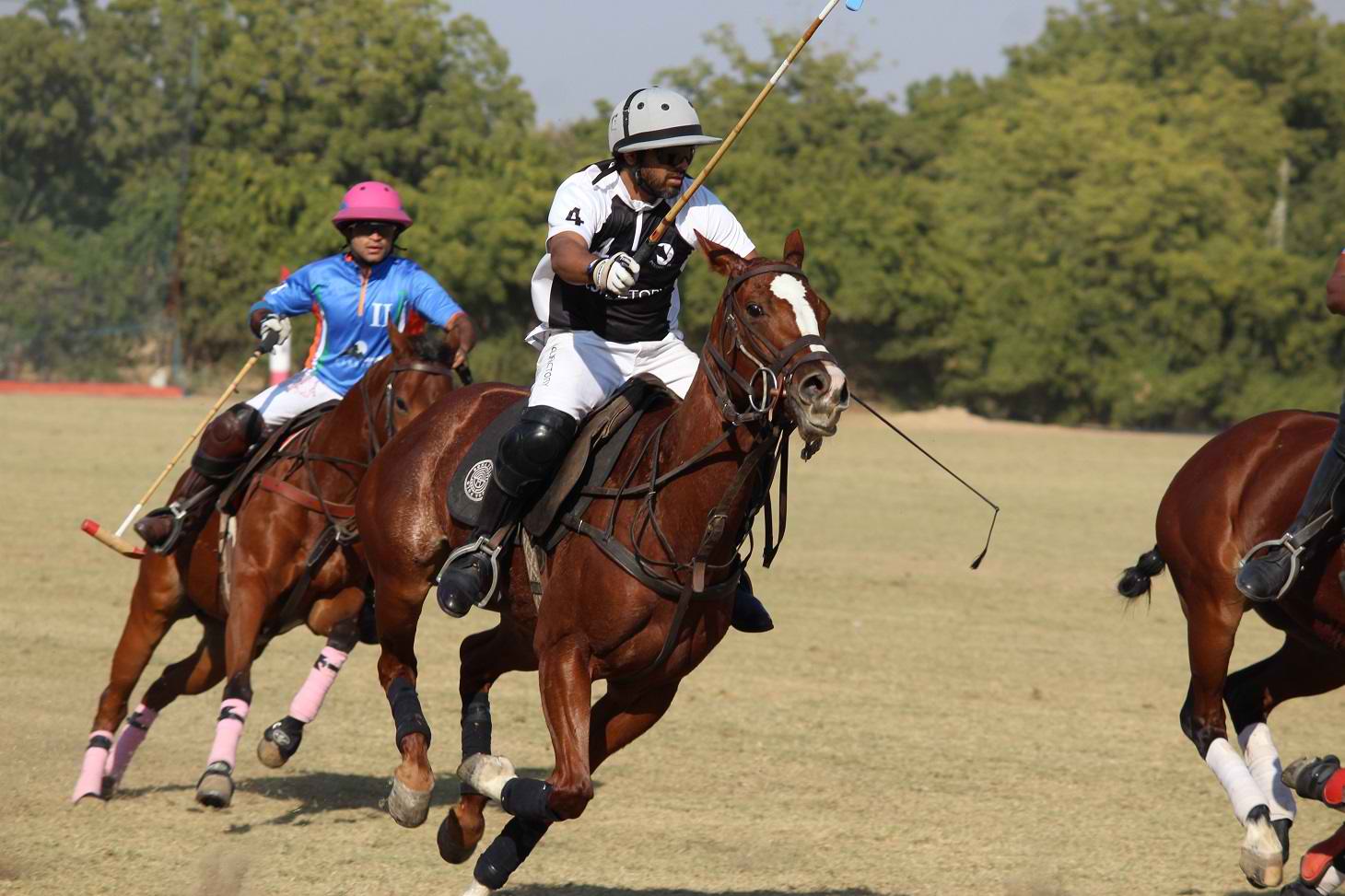 Jodhpur will go head to head with Sahara Warriors team for finals in Jodhpur cup held at MGSF ground, Jodhpur on 25th December i.e., on Christmas.