Originated in Central Asia, Polo traveled to Persia (present-day Iran) along with the nomads sometime between 600 B.C. and 100 A.D., who played a version of the game that was part sports and part training for war. 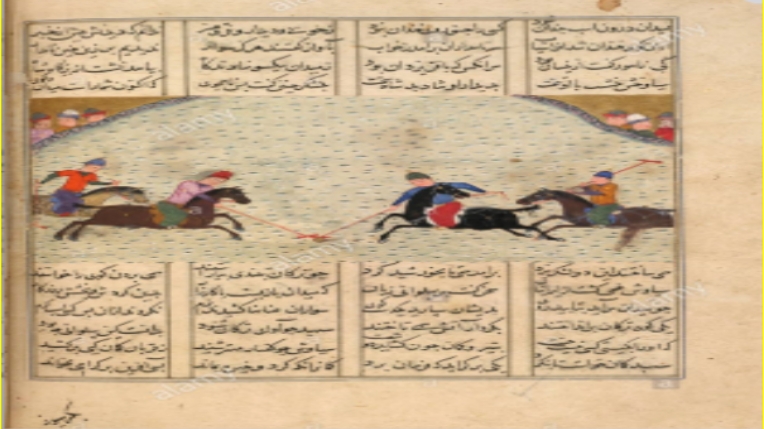 Polo match. Shahnameh. Iran, 1446. Siyâvash and Afrasiab (a mythical king of Turan) playing polo. A miniature painting from a fifteenth-century manuscript of the epic poem of Shahnameh.

The image is taken from Shahnameh. Originally published/produced in Iran, 1446.

Origins of the game

Originated in Central Asia, Polo traveled to Persia (present-day Iran) along with the nomads sometime between 600 B.C. and 100 A.D., who played a version of the game that was part sports and part training for war. Changing its form to the current one, Persians soon made it their national sport, played extensively by the nobility and military men. It was called ‘Chaugan’ in Persia back then. As per the accounts of Abulqasim Ferdowsi, the most famous of Iran’s poet-historian, in the 9th-century epic Shahnameh (The Book of Kings), Turanian force (Turkish forces) and the followers of Siyâvash, a legendary Persian prince from the earliest centuries of the Empire, were the first ones to try their hands at the game. Dinvari, another 9th-century Iranian historian, gave a detailed account of the game and its general rules in one of his works. He also gave some instructions to players including some advice to master the game.  Furthermore, Iranian King Qâbus of Ziyarid (Ziyâriân) dynasty, wrote down some general rules of the game, especially mentioning the risks and dangers of it.

Persian classics and art act as records for the many materials related to polo. Besides Abulqasim Ferdowsi and Dinvari, Nizami, a Persian poet also tells a story centered on the game of Polo in one of his works. It is about how Siyâvash, the king met his Aramean wife, Shirin, in the tale Khosrow and Shirin. Khosrow, who saw Shirin playing polo, found her as beautiful as if she were ‘a dove on the grass’ and as valorous as if she were ‘a hunting hawk’. He challenged her to a polo game. After Shirin won one game and Khosrow another, he said ‘the greatest blessing is to be created when two lovers stick around’. Polo’s popularity was also large in court life. It can be guessed from the fact that it was the most beloved motif in Persian miniature painting (later in Turkey and India as well), along with hunting.

Another poet narrates the tale of Khosrow and Shirin like,

When he (Khosrow) reached the polo ground,
The fairy-faced ones curvetted on their steeds with joy,
They started play
when every moon
appeared a sun and
every partridge a hawk.
At times the sun bore of the ball,
at times the moon.
Now Shirin won and now the Shah.

Furthermore, the court poet Farrukhi Sistani took only the Sultan’s polo hobby as the subject in his poetry during the 11th century. He even listed four things for the monarch to do: ‘feasting, hunting, polo game, and war’.

There was another interesting episode or theory around the origins of the game of polo in Persian history involving Alexander, the Great, and Darius, the last king of the Achaemenid Dynasty, who was killed by the former in the 5th century B.C.E. However, Iran’s narrative tradition describes Alexander as a half-brother of Darius, and thus, Alexander’s defeat of Darius and taking his throne was a legitimate succession of the Persian kingship. By making Alexander an Iranian, they wanted to say that he was no longer an Iranian enemy. An interesting event related to polo is also used to explain this. Alexander received an embassy from the Persian king Darius, bearing gifts. It included a ball and a stick, which meant ‘Don’t pay attention to war games and focus on children’s play’. However, Alexander told the Persian envoy that the ball was Earth, and he was the stick, so he would blow it away as he wanted. This is far before the claim that polo originated in the Parthian Empire, 247 BCE–224 CE, and hence, since Alexander the Great got a mallet and a ball from Darius III, it became an innate part of the Persian society. Firdausi, in one of his works also tells of Sapor-II Sassanid, King of the 4th Century A.D., who learned to play polo when he was only 7 years of age.

In any which way, Polo or Chaugan became an integral part of the Persian culture and it gradually began to emerge in other parts of the region.

From Persia, the game soon spread west to Constantinople where it was valued for training cavalry, and to Japan in the far east, by the Middle Ages. It also reached Arabia, China, Tibet, and India to the south.

The Abbasid Caliphate, successors of Prophet Muhammad, had a large Polo ground outside its wall in Baghdad and one of the cities’ early 13th century gates was named after these grounds. The game occupied an exalted place in Islamic court life, Haroon-al-Rashid being the first of the Abbasid Caliphs to play. Meanwhile, the game continued to be supported by Mongol rulers of Persia in the 13th century, as well as under the Safavid dynasty. It soon was learned by the neighboring Byzantine Empire. The 12th-century ruler, Manual I Commenos was a patron of polo. In no time, Emperors all throughout the region became so passionate about this sport that some built Polo stadiums, grounds in the vicinity of their forts and even died of exhaustion or fatal injuries while playing, Byzantine Emperor Hohannes Chinnasus was one such ruler who played until his leg and arm were crushed in a bad fall during a match.

Moving ahead in time, Polo became popular in South Asia and had a strong presence in north-western regions of present-day Pakistan by the 15th-16th century. It is still played by the hill tribes of northern Pakistan; the biggest match of the year in that region is played under a full moon on a rocky field astride the 11,000-foot Shandur Pass, following rules dictated 800 years ago by a descendant of Genghis Khan.

It also traveled to China via the silk road, where it was popular under the rule of the Tang dynasty. Polo was greatly encouraged in the Chinese army and was also one of the important subjects of the examination for government officials. Uncertainty around the origins of Polo in China, some believe that Chinese have learned the game from Iranian nobilities who seek refuge in Chinese courts after the invasion of the Iranian Empire by the Arabs, while other theories hint at the possibility of learning the game from the same Indian tribes who were taught by the Iranians. The game became popular as a result of which Polo stick appears on Chinese royal coats of arms and the game was part of the court life in the golden age of Chinese classical culture under Ming-Hung, the Radiant Emperor, who was a patron of equestrian activities. It is also said that the Japanese learned polo from the Chinese. Polo was also very popular in Tibet, and it is believed that the name of the game comes from the Tibetan word “pulu”, which in literal translation means ball.

There are few theories that revolve around the origins of Polo in India. Some religious rituals suggest that the history of Polo goes way deeper than the available records. It is said to have arrived and flourished in India in the 13th century along with Mughal conquerors, who played the game and inspired many local Kings and Princes to adopt it. The game was called “Chougan” by the Mughal rulers back then. In a dusty, back alley near Anarkali Bazar in Lahore stands a monument to Sultan Qutb al-Din Aibak, a 13th century King who died when his pony fell during a polo match. It is also believed that the first Mughal Emperor Babar, who founded the Mughal Empire in India in the 16th century, played polo and established it as the most popular of royal sports for his successors. Akbar, was so fond of the game, that he introduced a set of rules in the 1560s & invented a luminous ball made from a palas tree and played at night. His vast stables, which can still be seen near Agra, India, housed his favorite polo ponies. He was also known to have gold & silver knobs fixed at the end of his mallet. Moreover, The Mughals’ literature and art, which reached their pinnacle in the 17th century, were often decorated with polo as their theme. There are several miniatures in which Jahangir, the son of Akbar, plays polo, and also there are a number of literary works that encourage him to be bold and brave. Ancient art and literature also clue to the involvement of women in the game of Polo. It is said and also shown in some of the paintings that Sultana Chand Bibi, an Indian ruler, and warrior, was a gallant horse rider and fine polo player. Furthermore, Nur Jahan, wife of the 15th century Mughal Emperor Jahangir, was also said to be skilled at the game of polo. In the late 18th century, when the Mughal rule came to an end, the sport nearly died.  It was only the tribesmen of Baltistan, Chitral, Gilgit & Ladakh who kept the sport alive. 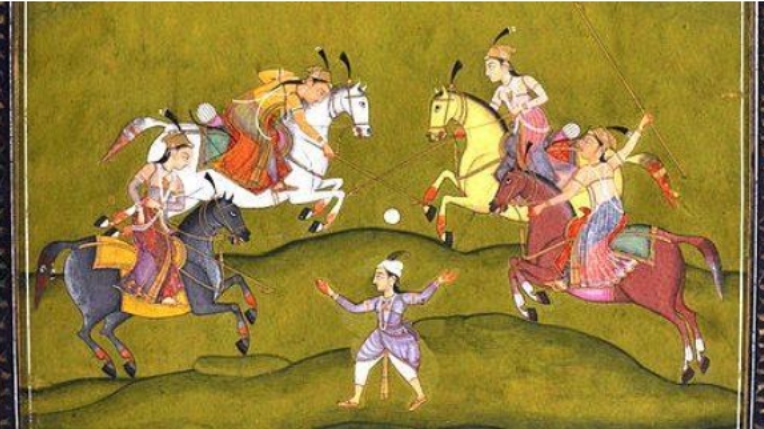 Chand Bibi, regent of the Deccan Indian Sultanate of Ahmednagar playing Polo with other princesses. Circa 1700 AD – 1750 AD.

Some Polo historians are of the opinion that the game has its roots in Manipur, a north-eastern state of India. Shrouded in the folk history of the region, the game was invented by Manipur’s deity-king Kangba in the 14th century BC. Additionally, it is believed that in 33 AD., deity-king Nongda Pakhangba organized the first polo match. The story as per popular Manipuri folklore goes that the gods celebrated the establishment of the Meitei kingdom with a fierce game of Sagol Kangjei, with teams of seven men, following rules created by none less than Marjing, the God of Polo. In fact, in The Guinness Book of Records 1991 edition, it is written, “Origins of Polo can be traced to origins in Manipur State c. 3100 B.C. when it was played as Sagol Kangjei”.

The East India Company and Polo

Entranced by the game, Capt. Robert Stewart, a prominent member of East India Company cavalry, participated in a match with Manipuri players in Silchar in 1853. This is recorded in the annals of Polo as the first official game. Shortly after, along with Col. Joseph Sherer, Capt. Robert Stewart formed the world’s first polo club, the Silchar Kangjei Club in 1859 in Assam, India. Within a decade, the game began to spread its tentacles in the rest of India, and soon after the Polo craze spread to the West. The first match was organized by Edward “Chicken” Hartopp at London’s renowned Hounslow Heath in 1869, after which the rules of modern polo were established by The Hurlingham Club, London.

Upgradation of the game

Through ancient art and literature, certain differences in polo of past centuries and the game as we know it today can be pointed out. The fields were often longer and narrower in the past, teams were frequently much larger than the four-a-side standard of today. The game was sometimes started with the ball placed at midfield and the two teams charging one another from opposite ends; sometimes the ball was thrown into the air and hit towards the goal to start a match. Mallets were of shapes, which would appear curious to the players of today. In Japan and in Byzantium, the sticks carried racquet heads rather than mallet heads, and a leather-covered ball was used as opposed to the present-day game equipment.

Also known as the early modern era, this epoch gave birth and identity to the game of Polo and it has grown leaps and bounds, in scope, reach, and opportunities, in the succeeding periods.