1920:Polo had begun to make its place in the Olympics ever since it was introduced as a competitive sport.

It was played at the Olympic games in 1920 and 1924. In 1924, in the games held in Paris, Juan Miles, Enrique Padilla, Juan Nelson, Arturo Kenny, G. Brooke Naylor, and A. Peña obtained the first gold in the history of Argentina, as a team. 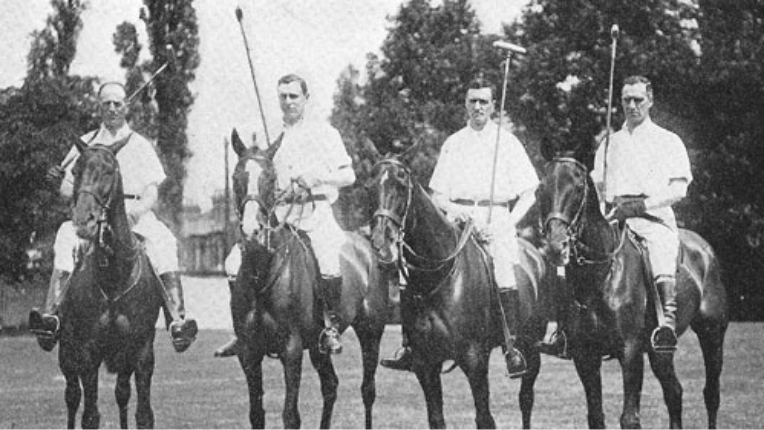 It was with this victory that the Argentine team found popularity among Polo aficionados and the first Cup of the Americas was played between the United States and Argentina in 1928 at Meadow Brook with close to as huge an audience as 100,000 spectators.

While Mr. Herbert had been running the USPA (United States Polo Association) excellently well as chairman for three decades, Louis Ezekiel Stoddard became the chairman in 1921 and held the post until 1936. Before vacating office, Herbert instituted a handicapping system for teams to be more evenly matched in games. The rating system that Herbert had developed continued to be followed after him too and is maintained to this day. The 1920s also saw women beginning to take the field in the United States, largely due to the efforts by Mrs. Thomas Hitchock Sr, and eventually formed the US Women’s Polo Association.
The fame of Polo had grown so great an extent that the decade had begun to see thousands of spectators at all the major matches held. Considering the transport system of those times, it was a great feat in itself for the game to attract as many followers. This popularity extended to the USPA claiming 1,407 members in the same decade while it began to register ponies as well.
An interesting story comes out in the form of the journey of Cecil Smith, who was born on a Texas ranch and began to play polo in 1924 while he worked for a horse trader. With an exceptional love for the game, he went to become U.S. Polo’s first true professional, having won the Monty Waterbury Cup in 1930 and held a 10-goal rating from 1938 to 1962.

Polo and the Army

Besides the reputation that polo had gained over the years, it enjoyed an exclusive place in the army. While in 1920 the army officers from Ft. Myer played polo on the DC National Mall, in 1921 the military/war department held the Annual Military Polo Ball which was a combination of military, sport, and society. In the year 1923, polo in the army had spread to 52 military bases throughout the United States and had begun to be used as a singular sport to train officers.  Further ahead in 1928 the U.S Army team was one of the finalists of the U.S. Open and army teams emerged throughout the United States, the Philippines, Hawaii, and Panama.